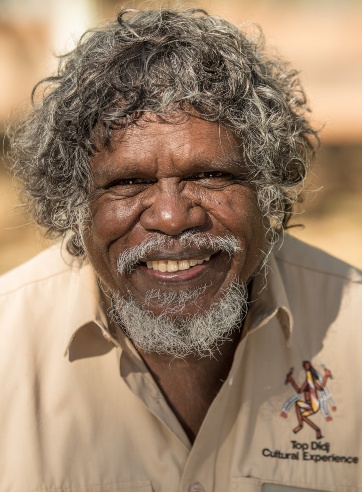 Manuel Pamkal was born in the Northern Territory bush so remote that the first time he saw a white person, he thought he was looking at a ghost. When he first arrived at school (as a teenager, having never sat on a chair or held a pen), the principal guessed his birth year as 1966. Manuel is more inclined to believe a whitefella who married into his family and saw him as a baby – he says 1963.

Today, the charismatic Dalabon man tells his fascinating life story to visitors at Top Didj & Art Gallery near Katherine, 320 kilometres (200 miles) south-east of Darwin. It starts with his childhood spent hunting goannas and lizards and digging for yams. After a near-death experience as an adult (detailed in an episode of the ABC television program Australian Story),

Manuel turned his life around, quitting alcohol to become a role model for
his community.

At Top Didj he shows visitors how to throw a spear, light a fire, and paint-after telling his story of life growing up the traditional way in the bush.  He welcomes people by playing the didgeridoo and singing a song in Dalabon-a central Arnhem Land Language that experts say is now spoken fluently by less than 30 people.

Manuel is a talented artist who specialises in rarrk (cross-hatching) painting. His fine brush is made from billabong reeds and his preferred medium is acrylic on canvas. “I’ve been painting all my life, from young up until now,” he says.

Click here to learn more about the experiences that Manuel offers