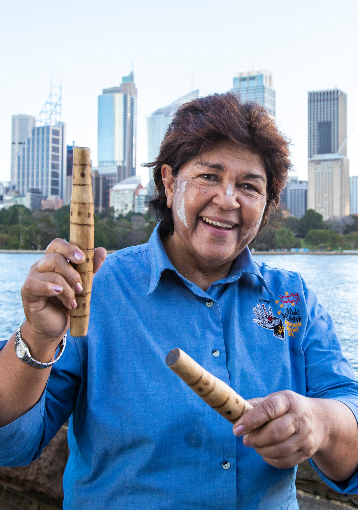 Aunty Margret is an icon in the Aboriginal and Torres Strait Islander tourism space.  A pioneer in the cultural tourism market, with more than 30 years experience, Aunty Margret has a wealth of stories and insights to share across both tourism and cultural. Ask her about Dreaming-ism!

Born at sunset on the bend of the Macleay River and raised at Burnt Bridge in Dunghutti Country, South West Rocks New South Wales, “Muughi” (meaning Margret) is a proud saltwater woman. Aunty Margret has experienced some of Australia’s most turbulent political decades of racial injustice, inequality and discrimination which ultimately brought her to Sydney, which she now calls home.

From the age of five Aunty Margret was educated in her traditional custodianship of Dunghutti Culture, the Baranbyatti Mirra Buuka or Dreamtime Southern Cross.  Talking to Aunty Margret is to learn both the living wisdom and practical relevancy of her ancestor’s Dreamtime stories and the tangible ways it still influences and shapes our lives.

A qualified teacher and founding member of Aboriginal Educational Consultative Group, Aunty Margret helped to introduce and shape Aboriginal cultural curriculum in Australian schools and higher education institutions. It is the combination of her passion for education and deep cultural understanding which lead her to start Dreamtime Southern X.  A natural extension of teaching, Dreamtime Southern X tours reflect Aunty Margret’s living, interactive understanding of the Dreamtime landscape and stories.

Central to Dreamtime Southern X is Aunty Margret’s desire to ensure that the world’s oldest continuous, living culture is shared, explored and respected by everyone. The tours are designed to educate creating mutual understanding and respect between Aboriginal and non-Aboriginal people grounded in cultural understanding of Dreamtime and the Australian landscape.